We employ experts and specialists boasting know-how and experience z zakresu digital marketingu. in the field of digital marketing. Our specialists have specialist knowledge in various competence areas related to marketing, such as: * developing and designing brand strategies and their communication * branding and visual identification * concepts and creation of marketing campaigns * brand management in Social Media * strategies and content marketing * implementation of brand, image and performance campaigns * planning and conducting integrated omnichannel marketing campaigns * designing and implementing websites and e-commerce stores and other IT services * SEO/SXO * Internet analytics * UX/UI * campaigns and activities in the field of Performance Marketing - including e-commerce store conversion optimization * digital strategic as well as marketing and business consulting.

We take into our comprehensive digital care many businesses and brands. Why not let us become your guide in the complicated Internet world.

One of the first investors of the Veneo agency and owner of a controlling stake. Tomasz is a graduate of Computer Science (1995) and Management and Marketing (1998) at the AGH University of Science and Technology in Krakow.

Already as a student, Tomasz invested in the Warsaw Stock Market, and was one of the founders of the Abakus company established in 1994 - the producer of the Giełda software supporting the technical analysis of share prices. In 1995, for 5 consecutive years he worked in the Krakow brokerage houses KDM (later IDM SA) and Penetrator, among others as a capital market analyst and head of the IT department. He published regular stock market analyzes in, among others, Rzeczpospolita, and Prawo i Gospodarka, Dziennik Zachodni.

In 1999, Tomasz Jażdżyński joined the Interia.pl portal, where in April 2000 he took the position of the president of the company's management board. In 2001 - before turning 30, the youngest president of the management board in the history of the Polish capital market – he launched Interia.pl SA on the Warsaw Stock Exchange. During his tenure, the Interia.pl portal, starting from scratch, gained and strengthened the position of the third largest Internet media company in the country.

After one of the owners had blocked the planned and prepared issue of new shares, which was to allow the takeover of the Gadu-Gadu instant messenger, in 2004, Tomasz Jażdżyński left Interia.pl and joined Wirtualna Polska. There, he served as CFO and was responsible for the financial and operational restructuring of the then bankrupt company.

The Wirtualna Polska portal back on the track, Tomasz Jażdżyński, along with minority shareholders, took over in 2005 as the president of the management board of Bankier.pl SA. In 2006, he executed the company’s debut on the Warsaw Stock Exchange, thus becoming the first president of the management board to introduce two companies to the main trading floor of the Warsaw Stock Exchange.

After Bauer Media group took over Interia.pl, again, from 2008, he was the president of the portal's management board. At the same time, he was also a member of the Internet Steering Committee of the global Bauer Media group.

From 2011 to 2016, Tomasz Jażdżyński was the president of GG Network SA (part of the Naspers Ltd media concern), the operator of the Gadu-Gadu instant messenger. From the beginning of 2013, he was also the Managing Director of the Media and Communication Segment of the Allegro Group, which, apart from GG Network SA, also included Grupa Bankier.pl sp.z o.o. and Wykop.pl sp.z o.o.

Since 2017, president of the management board of Gremi Media SA, the publisher of, among others, daily newspapers Rzeczpospolita and Parkiet and portals rp.pl and parkiet.com.

During his professional career, Tomasz Jażdżyński was a member of the supervisory boards of both IAB Polska and Polskie Badania Internet sp.z o.o., actively involved in creating policies and standards of the Polish Internet market.

Beata has been working in the media and advertising industry for 20 years. In 1999, she was a member of a narrow concept group that created the INTERIA.PL portal, and thereafer was responsible for the portal’s business development until the year 2000. She was one of the founders of the first mobile marketing company in Poland - Mobile IT. Associated with this industry for the next several years, working, among others for L2Mobile and Mobiltek. Beata was the originator and contractor of the project to revive the Wawel Dragon - Smoczy ogień na SMS, which in 2006 won the award in the first edition of the Golden Arrow direct marketing competition in the mobile marketing category.

In 2007, Beata became a shareholder and president of the board of the Veneo digital agency. Since 2010, she has also been the Director of Strategy and Creation.

He has been working in marketing branch for over a decade. Gained experience firstly as a freelancer and later in Krakow's advertising agencies (Insignia, ImaginePR, ContentHouse, Semahead), where he was responsible for content marketing and social media marketing in a conceptual and strategic perspective. He loves to play with words and experiment with conventions. A cultural expert by education.

After hours, he takes care of two ginger cats, reads a lot, writes books (he has already published two), manages a portal for aspiring writers, creates patchwork poetry on Dzienność fanpage and ever and anon makes analog photos.

Art director, graphic designer, in his free time passionate about video formats, in which he explores the secrets of editing.

Kacper has worked and designed, among others, for brands such as: Oshee, Tiger, Koral, Novartis, Kryniczanka, Buma, AFI Europe Poland, STAG, and Black Red White. Despite already having extensive experience and working on large projects, Kacper keeps on developing his skills. In particular, he is learning about the creation of video materials from the perspective of the operator and editor. Specializes in branding, web design, and creating visual identities. In private, Kacper likes to relax playing jRPG on the console or online shooters, or read a good fantasy book. His favourite writer - Jacek Dukaj.

Trust us, we can help you build your business. 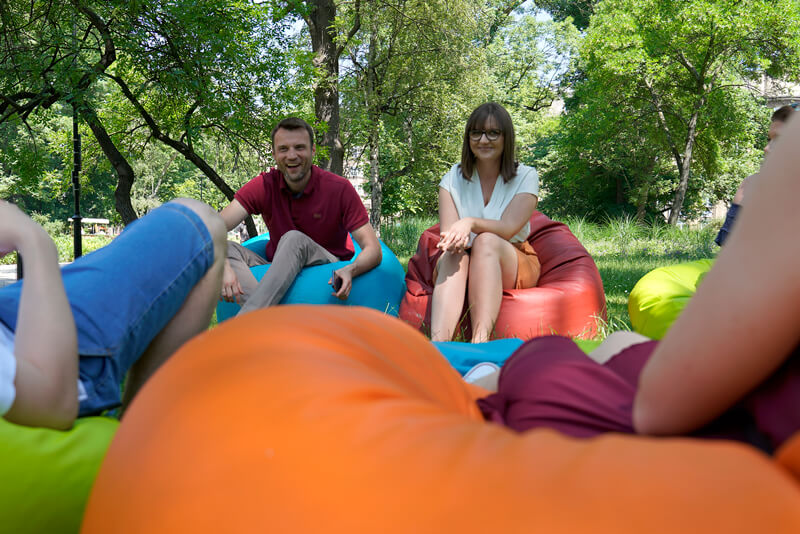 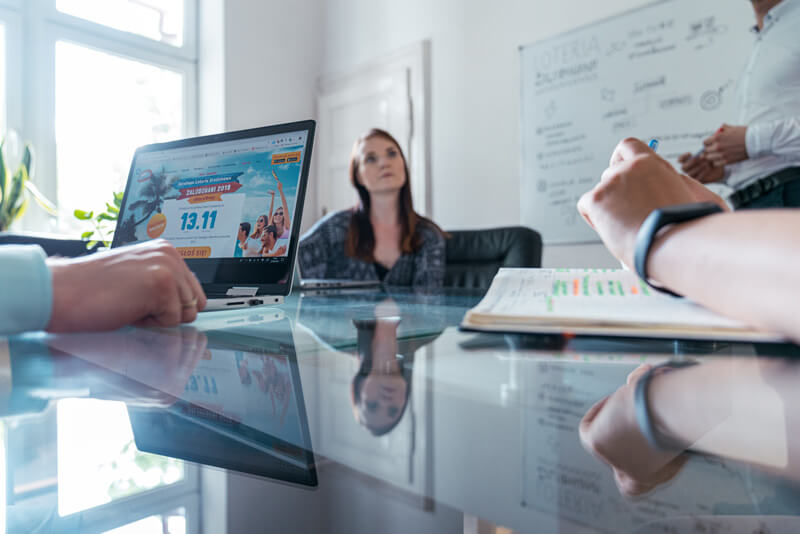 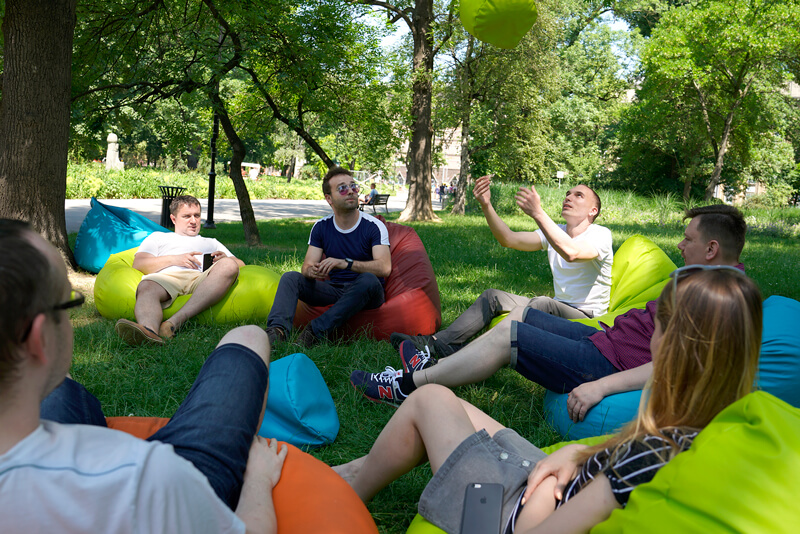 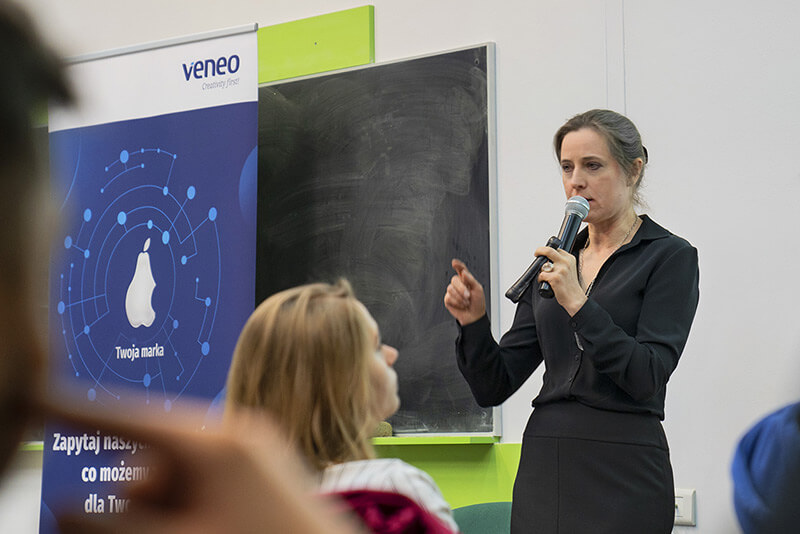 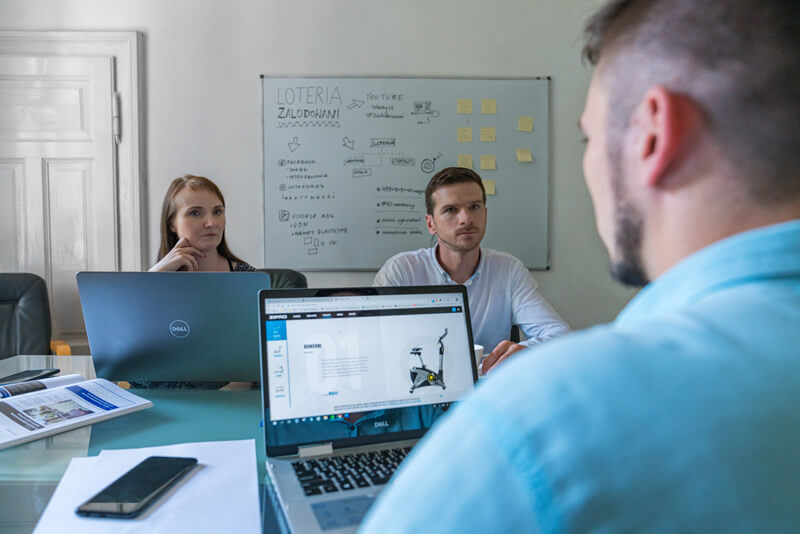 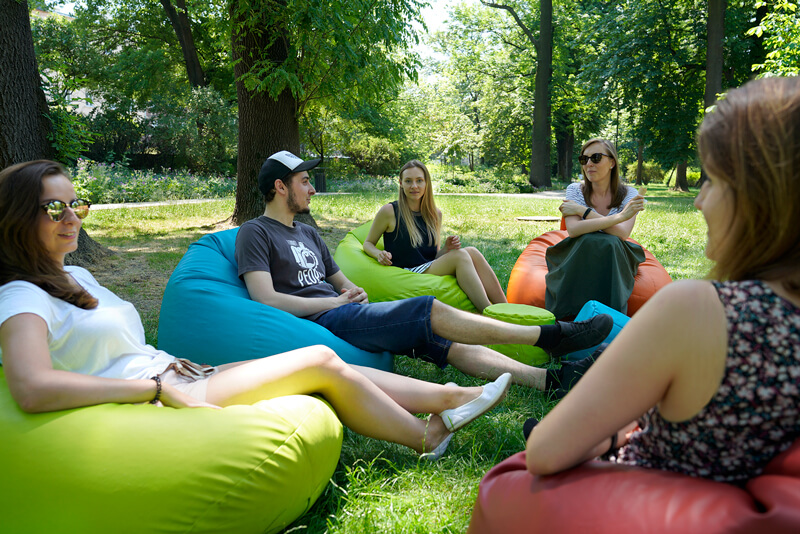 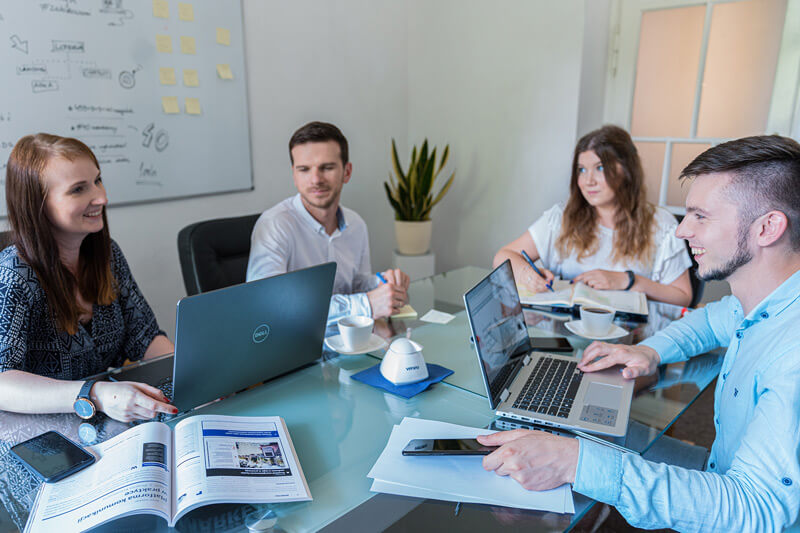 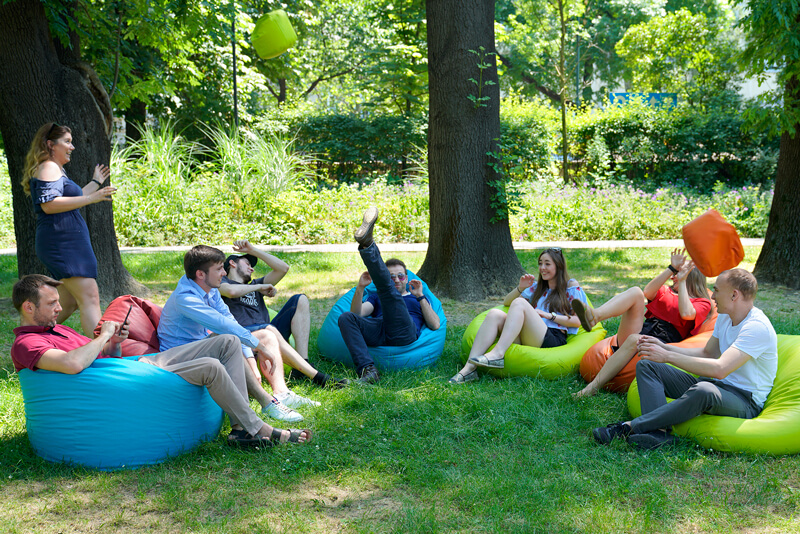 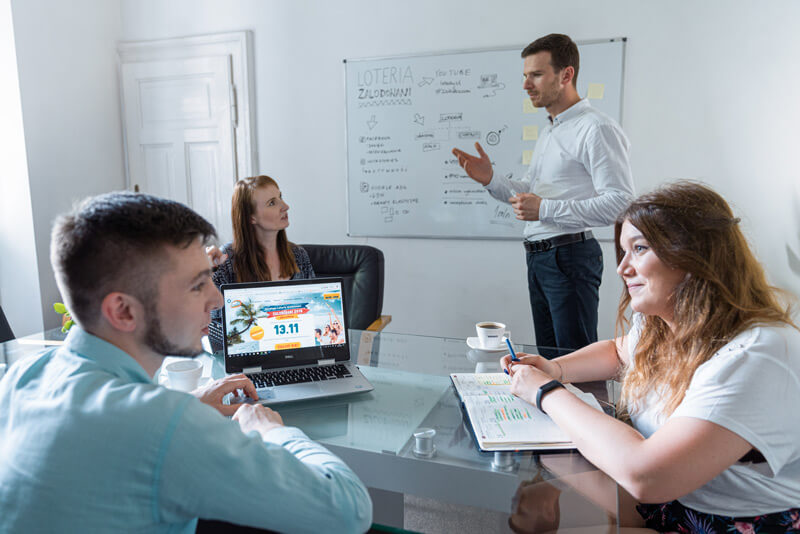 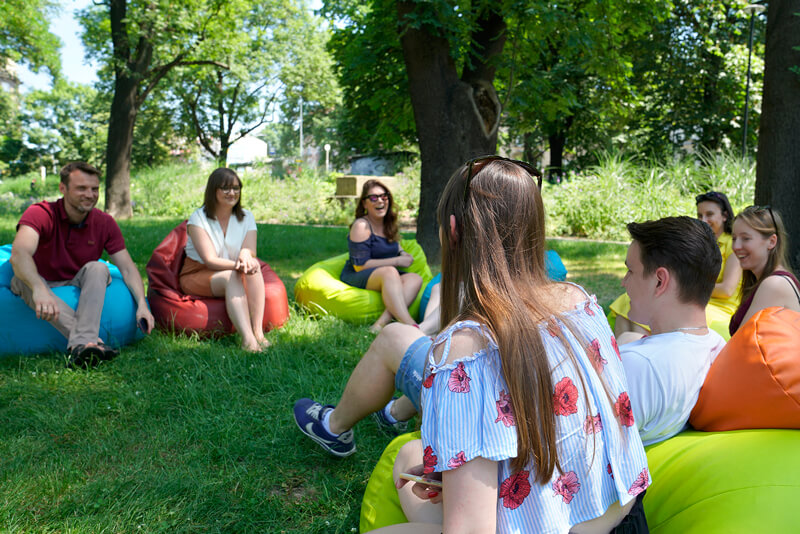 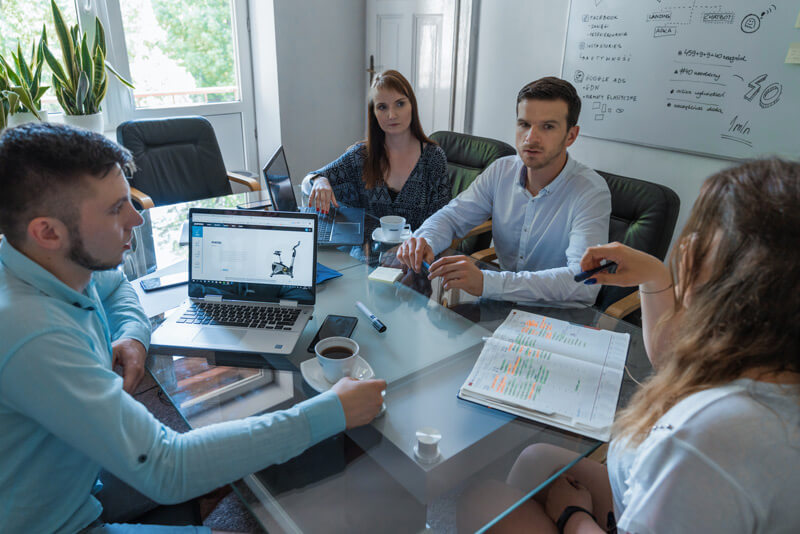 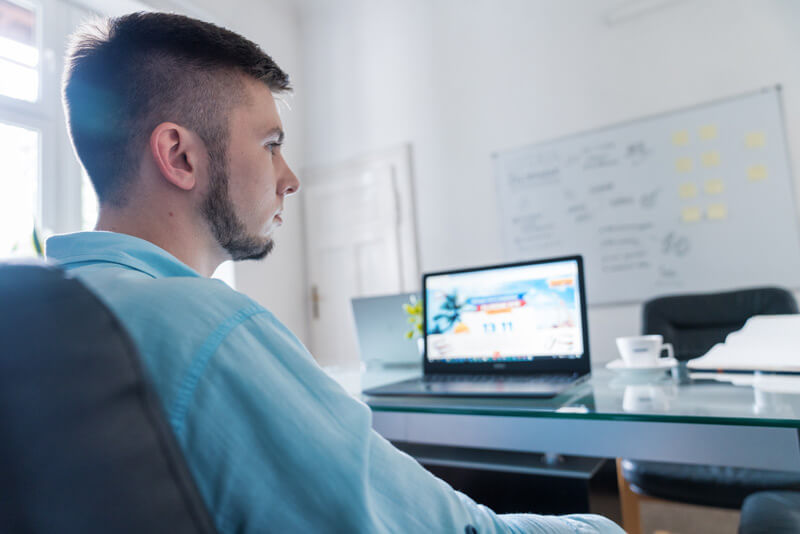 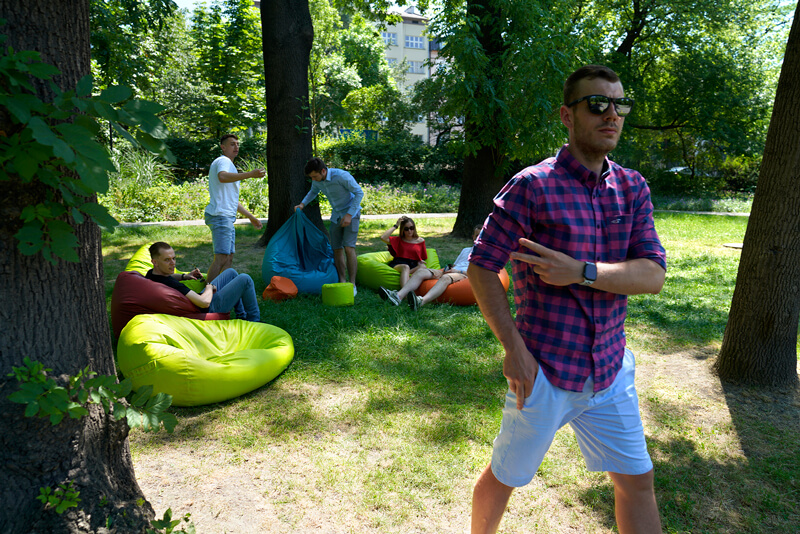